Now I am most definitely not the perfect photographer. I wish I was, but I'm not and these blog posts will definitely reflect that. This post especially will take a look at a few of my weaknesses that I'm trying to work on. Night photography is a beautiful thing and even more so when the northern lights show up creating something magnificent to look at in the night sky in addition to stars.

So lets take a look at what my journey has been so far with my northern light encounters. To date, I've only photographed 3 events, but only really visibly seen 2 of them. Lake Louise is north enough to see them, but not enough to view them the way you will see them in pictures. They are typically duller, but that does not change how beautiful they pulsate and dance above you. 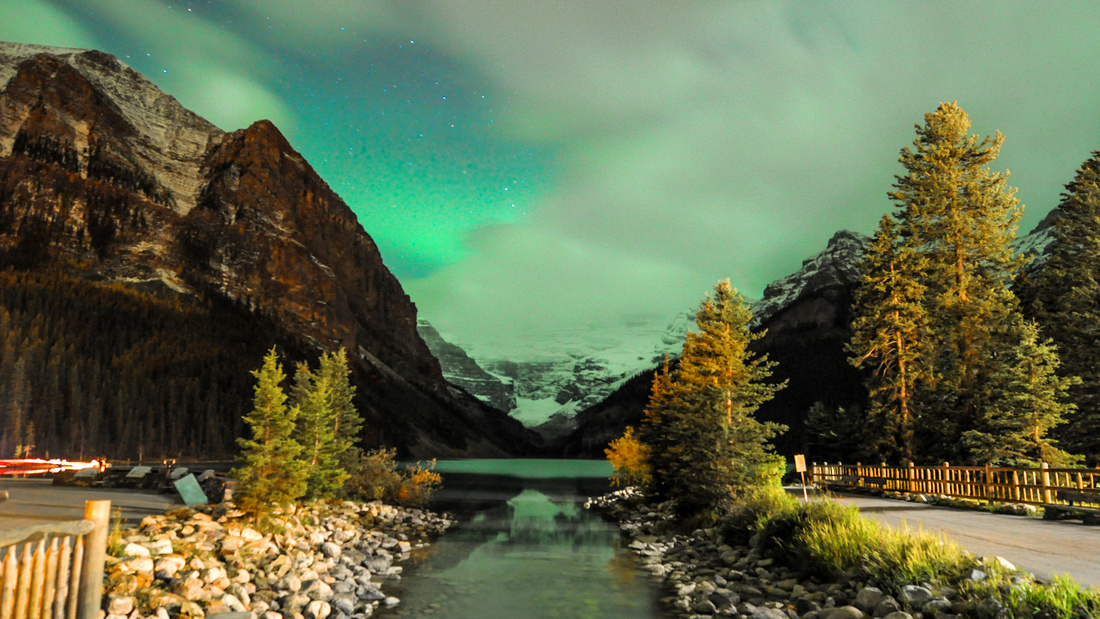 This was my FIRST picture I took of the aurora ever... and it was a "mistake"! It was a mistake because my ISO was higher than i originally wanted it to be, but it turned out great! The trees are all lit up by the Chateau Lake Louise beside me on the right, but this must be one of my favourite ones still today. If only my foreground and mountains were tack sharp. Otherwise, this picture is definitely my favourite because it means something to me both the location and the fact that it was my first aurora borealis captured on my camera. 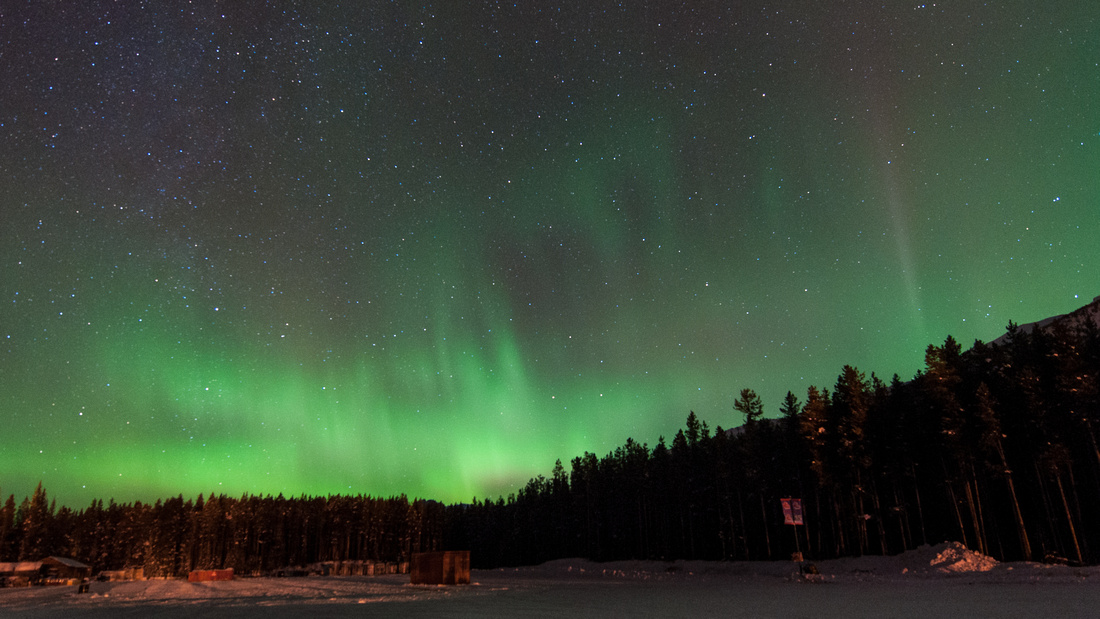 This one was the BEST aurora borealis display i have seen to date. I first spotted it during a drive back from Calgary with some friends. The whole time I was staring at a cloud in the distance because I was intrigued by how it was moving. We stopped on the side of the road to dispute something trivial, but when we got out i also noticed that the cloud was not a cloud, but the aurora! It was just dancing and it was the most amazing thing I have ever seen. The only thing missing: my camera. So when we got back to Lake Louise, I went into my room to grab my camera and tripod and bolted back out to take pictures. When we went to the parking lot of the Lake Louise Ski Resort, we could see this light pulsating and dancing around. Definitely one of the highlights of my life witnessing this. 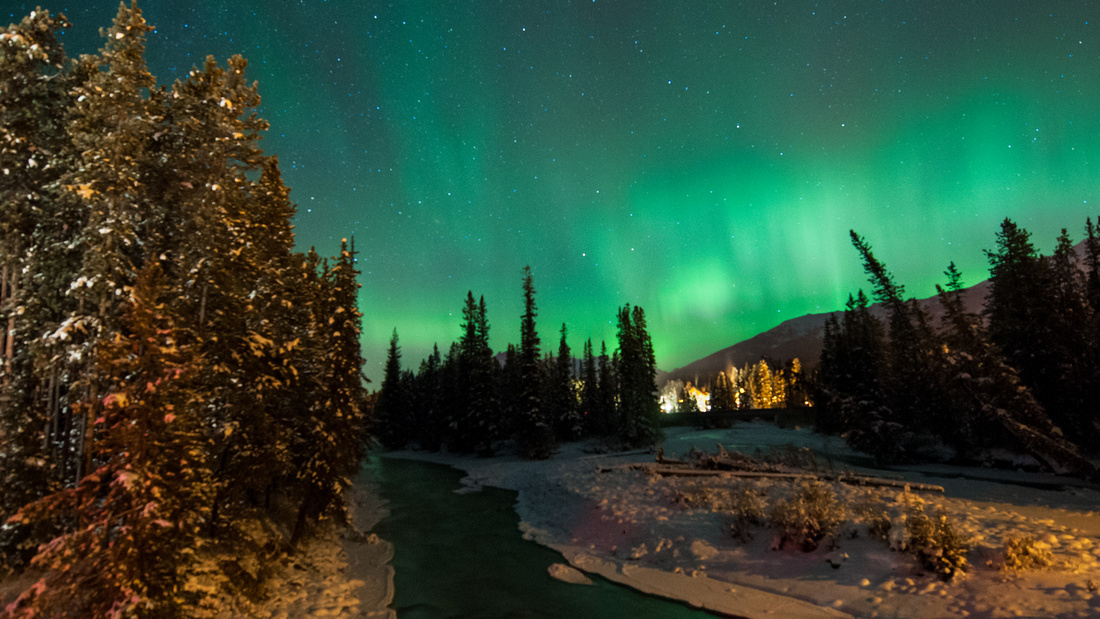 Aurora at the Village

This was the Aurora down at the village. I tried to look for something to compose my picture and this was the best I could think of at the time. This was on the bridge going from the village up to the Chateau Lake Louise. Also would have been perfect had the trees and the buildings in the background been tack sharp. Zooming in to the picture... I found that it was slightly out of focus as is the trend with these photos. Beautiful photo none the less, but not good enough for me to be satisfied with it. 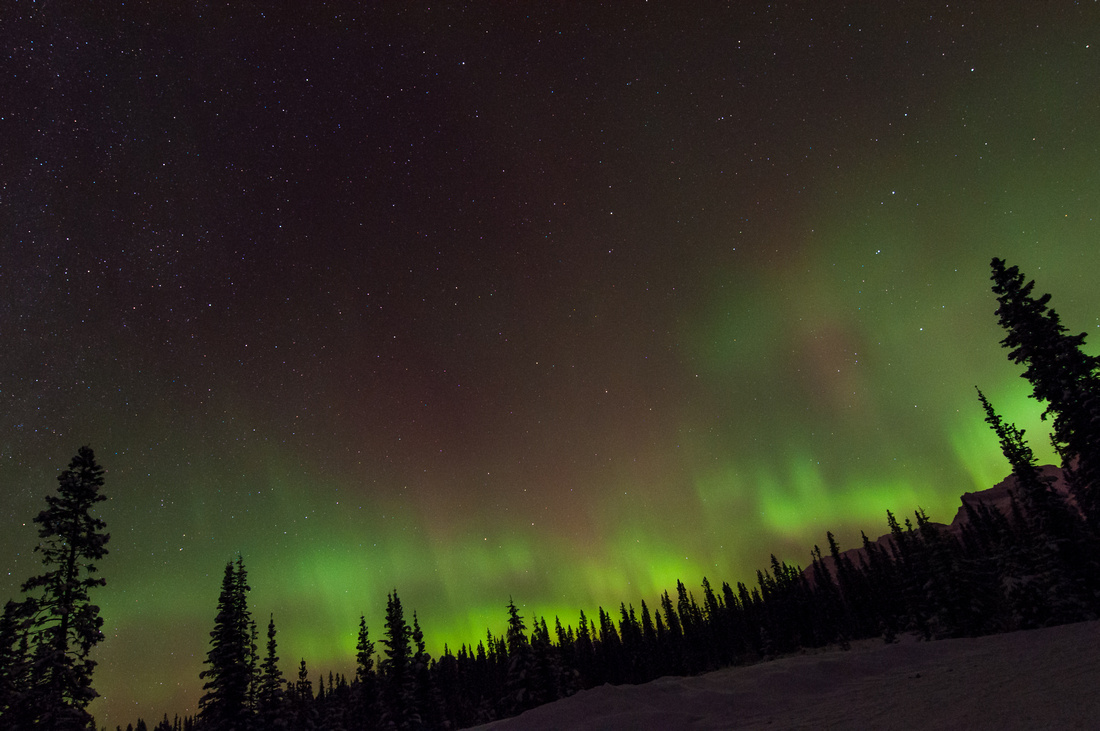 I loved this photo so much that it was my desktop background for a while. I didn't really have anything in the foreground that needed to be super sharp and I was able to capture the aurora. The only thing I would have loved is if there were larger mountains to compose my picture with. This did not give me a sense of location whatsoever. I could have been anywhere taking a picture of this. I was actually at the Great Divide trail or the old 1A just off Lake Louise Dr. It was a wonderful sight, but just nothing to anchor me in to a specific location not like the first photo of the aurora at the lake itself. 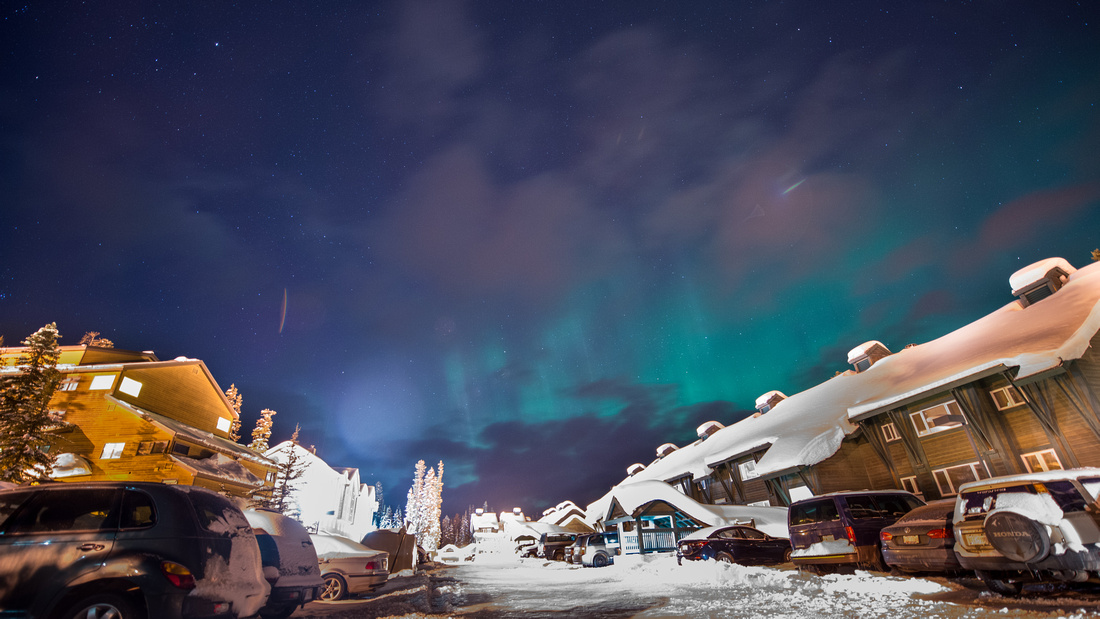 Aurora at the staff accomodations

This was the most recent photo I took. This was taken about 3 days ago when there was a red alert for an Aurora Borealis. By the way, I just use the website and app from www.auororawatch.ca It sends yellow and red alerts through email when there is northern light activity up in the sky detected. Back to the photo, this picture was taken at the staff accommodations for employees working at the Fairmont Chateau Lake Louise. All of these pictures were taken around ISO 1600-3200 at 10-15 seconds and most likely F/2.8 or in one instance f/5.6. The above picture was taken at ISO 1600, 10 second shutter, and f/2.8. Again, this was the first photo I took of the night. Of course the lights from the buildings were all blown out, but I recovered as much as I could using lightroom. It was definitely not the perfect picture, but it was the first time I took a picture of the aurora with my D800. All the other pictures were taken with my D5000 proving that you could do this with any camera that can use a long shutter speed.

I do not usually like leaving a blog post with no closure - a picture of the aurora that I was actually satisfied with.  Sometimes we just need to keep trying and pursuing our goals. This post was more about the journey than the destination. I still have a lot more room to grow, and I hope that you will follow me on this journey as well!

If I do take a good northern lights photo though, you will definitely know. I would not be able to help sharing it.

Take care guys, until next time!